Does your business or organisation require the power of film to tell your story?

We can provide you with a no obligation quote for your project. When planning your project, you might like to consider the following:

Please get in touch to discuss your requirements.

Colleen has been rolling on a skateboard for close to 17 years now. It was natural that she would document this passion of hers on camera. Back in 1998-2003, Colleen teamed up with Ty Peterson and Lance Balchin to film skater profiles in Melbourne for their Local Vision Show, Grind TV and FS/BS. In 2001, Colleen created Chicks with Decks, a short skateboarding flick on five girls that skate in Melbourne.

From Chicks with Decks, she went to work as Cinematographer & Field Director for AKA:Girl Skater

Fast-forward to 2012, Colleen had the opportunity once again to work on some skateboarding flicks. Not that she didn’t keep filming skating in between, its just that most of the skating she filmed ended up on youtube and facebook, rather than being produced into a film.

As part of her role as ABC Open Producer in Warrnambool, she produced a few mini-documentaries with local skaters as part ABC Open’s 110% Project. Colleen mentored Billy and Jesse Abrahams to make Billy and Jesse.Skateboarding.Warrnambool. Their short film has screened on News24 (ABC Television) a number of times and the boys are now sponsored skaters and still skating with the same passion and competitiveness as when this film was made.

Colleen followed up their project with an interview with their mum Cilla who has a pivotal role in their success. She drives them to all their skate competitions, and films them too!

Colleen continued to hang out at the skate parks, skateboarding with her husband Luke Foster and son Fred. And this is where she spotted Harvey McCorkell and through him, was introduced to Chair Skating. In her role as ABC Open Producer, Colleen collaborated with Harvey and his mum Kylie Thulborn to create Harvey Shares The Stoke. Read about Harvey and Kylie on ABC Open. Colleen also followed up this project with an interview with his mum Kylie, the driving force behind the Share The Stoke movement (A movement that provides opportunities for people in wheel chairs to experience ‘extreme’ sports, such as chair skating and adaptive surfing)

Harvey shares the ‘Stoke’ from Harvey McCorkell on Vimeo.

P is for Participation from ABC Open South West Victoria on Vimeo.

As recently as March 2014, Colleen caught up with Kylie Thulborn, Christiaan ‘Otter’ Bailey and crew at a ‘Share the Stoke’ Chair Skating Event in Melbourne. The event was about introducing new people to ‘Chair Skating’ and ‘having a go’. Colleen caught some of the action and edited this short video ‘Hardcore Sitting in Melbourne’

Hardcore-Sitting in Melbourne from First Ladies – Colleen Hughson on Vimeo. 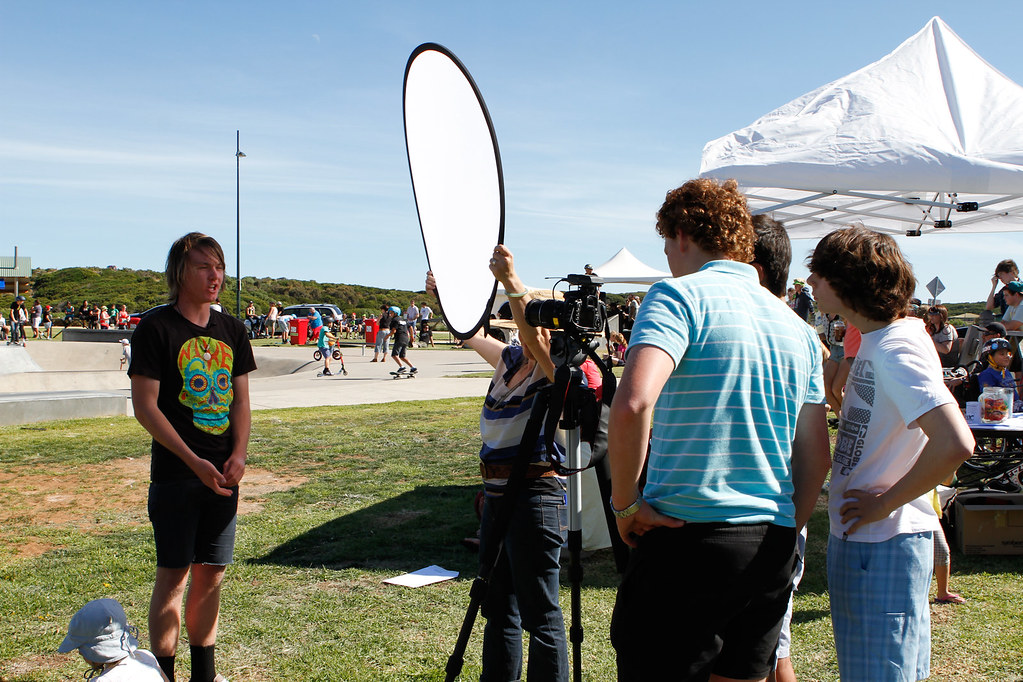 In her role as ABC Open Producer in South West Victoria (2010-2013), Colleen has coordinated many digital media projects and delivered countless workshops in her local community. She has worked with primary schools, secondary schools, TAFE, community groups, senior citizens, people with disabilities and the indigenous community. She adapts her workshops to suit the ability levels and experience of workshop participants. The stories produced by her community as part of ABC Open projects have been distributed far and wide on all ABC platforms: web, radio and TV. Colleen has run workshops in film production, sound production, photography, writing/blogging, social media, digital story telling and creating media using new technology (such as smart phones and iPads).

Before her time at ABC Open, Colleen worked in Melbourne in the Bayside area as a Secondary School Teacher and as a project coordinator of the Bayside Film Festival Youth Documentary Program. In this position, she developed, coordinated and facilitated a series of documentary filmmaking and digital storytelling workshops to schools and community youth groups. The outcome of the project was public screenings of the films at the Palace Cinema, Brighton in 2006 and 2007 and circulated DVDs of the films.